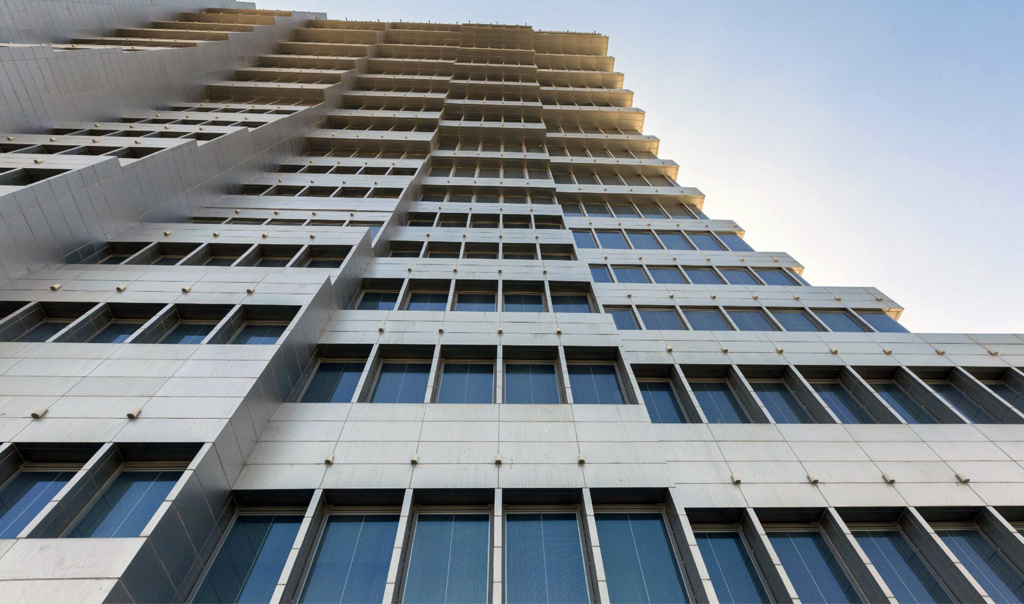 Jaam Tower is located on a ۴,۶۰۰-m۲ site. The project is adjacent to Shariati Avenue, one of two central and historic arteries in Tehran running along a north-south axis, connecting Tehran’s Shemiran area in the north, to the more historic fabric in the city center. Additionally the site’s proximity to important highways such as Resalat and Hemmat (east-west axis), as well as Imam Ali and Sayyad Shirazi (north-south axis), provide it with fast, easy access and make it an ideal location in the city. Jaam Tower is composed of two volumes: a horizontal commercial platform with a footprint coverage of ۸۰% in two levels, and a vertical office tower with a footprint coverage of around ۲۵% in ۲۵ stories. The complex has ۷ underground parking levels, and a rooftop restaurant and helipad, ultimately making it ۳۴ stories tall. Because of the project’s adjacency to Shariati Park on the west, and in order to use the roof of the commercial volume as a terrace, and to meet the regulations for multi-story construction (pyramidal outline), a modular system was designed to allow for the gradual transformation of the two horizontal and vertical volumes. The simple cubic form of the modern office tower was broken down into repeatable modules designed with ۷.۶-meter spans, which was ideal for different office/commercial spaces, as well as the parking. The modules are stacked in a way to allow for views of the park on lower levels, and to avoid blocking sunlight and airflow on the north. With an unusual transformation, the horizontal platform allows direct access from the park and adjacent sidewalks to the roof garden of the commercial volume, and visually merges the green space of the park with the project, creating a connection between workspace and landscape. This allows office users to have views of a green landscape, even though they are in a building in midtown Tehran. In addition to providing suitable solutions to urban and climatic issues, and seamlessly combining the two horizontal and vertical volumes, the project sets aside the cliché of modern cuboid towers, replacing it with a penetrating, floating structure. Tehran’s natural slope from north to south, make this project visible from different parts of the city, turning it into a distinctive landmark. 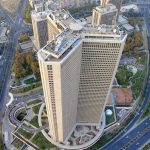